Featuring the film: TOGETHER WE CYCLE

Join us for a virtual New York documentary premiere and select short films curated by BFF preceding the feature-length presentation.

Bicycle Film Festival has been celebrating bicycles through art, film, and music for the last 20 years. Founded in New York City in 2001, the physical BFF spanned the world in over 90 cities worldwide to an audience of over one million people. The festival has an incredible history of working with the most important artists, filmmakers, venues, and institutions around the world.

TOGETHER WE CYCLE (feature film) investigates the critical events that led to the revival of the Dutch cycling culture. For most people, cycling in the Netherlands, appears like a natural phenomenon. However, until the 1970s the development of mobility in the Netherlands followed trends across the globe. The bicycle had had its day, and the future belonged to the car. The only thing that had to be done was to adapt cities to the influx of cars. Then Dutch society took a different turn. Against all odds people kept on cycling. The answer to the question of why this happened in the Netherlands, is not straightforward. There are many factors, events, and circumstances that worked together, both socially and policy-wise. In TOGETHER WE CYCLE, key players tell the story of the bumpy road which led to the current state. Where cycling is an obvious choice for most citizens.

A portion of all ticket sales goes to support the work of Transportation Alternatives and Bike New York.

Transportation Alternatives' (TA) mission is to reclaim New York City's streets from the automobile and to advocate for better walking, biking, and public transit for all New Yorkers. Through grassroots organizing, data-driven research, and strategic communication campaigns, TA advances infrastructure and policy improvements that prioritize people, create safer streets, and ultimately realize a more accessible, sustainable, and equitable city. Since our founding in 1973, we are proud to have led and won the critical campaigns that brought the first public bike share system, the first protected bike lanes, the world's largest automated speed safety camera system, and the nation's first Vision Zero initiative to New York City. Learn more at transalt.org

Bike New York empowers New Yorkers to transform their lives and their communities through bicycling.  We provide a wide array of free bike education programming to New Yorkers, including Learn to Ride classes, after-school and summer camp programs, and bike safety skills in middle schools throughout the five boroughs.  Through Bike Path, Bike New York trains formerly incarcerated New Yorkers to become bike mechanics who are then employed by Citi Bike.  Our Recycle A Bicycle community bike shop in Clinton Hill, Brooklyn is responsible for salvaging 1,800 bikes and 45,000 pounds of waste annually from the city's landfills while providing affordable refurbished bikes to New Yorkers.  Bike New York also advocates for safer and more equitable streets in NYC. Learn more at Bike.nyc

How does the virtual Bicycle Film Festival work? A ticket allows you to view the feature length film TOGETHER WE CYCLE at any time from Friday May 14 at 6:00pm ET until Monday, June 7 at 11:59pm ET streamed to your computer, tablet, or smart TV by simply clicking on the link provided by email after you purchase. You may view BFF in one sitting, or as you will, from the comfort and safety of your home. Ticket prices are sliding scale at $10, $20, or $30. All ticket prices entitle you to the same content. 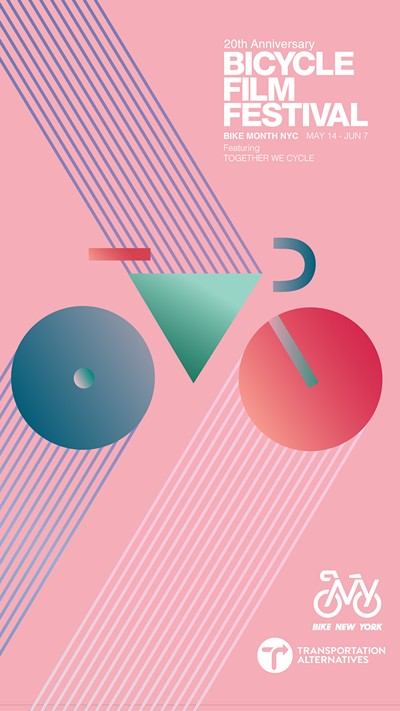