SOLD OUT******
There was a huge amount of enthusiasm for BFF Gazelle. Thank you for all the support. Those who have registered for a ticket have until May 31 at 11:59pm PT to watch.

In partnership with the Bicycle Film Festival, Gazelle is excited to present the documentary film Together We Cycle. Join us for the Panel Discussion hosted by Gazelle following the feature length presentation.

TOGETHER WE CYCLE (a documentary feature film) investigates the critical events that led to the revival of the Dutch cycling culture. For most people, cycling in the Netherlands appears like a natural phenomenon. However, until the 1970s, the development of mobility in the Netherlands followed trends across the globe. The bicycle had had its day, and the future belonged to the car. The only thing that had to be done was to adapt cities to the influx of cars. Then Dutch society took a different turn. Against all odds, people kept on cycling. The answer to the question of why this happened in the Netherlands is not straightforward. There are many factors, events, and circumstances that worked together, both socially and policy-wise. In Together We Cycle, key players tell the story of the bumpy road which led to the current state...where cycling is an obvious choice for most citizens.

GAZELLE is a 129-year-old Dutch bicycle manufacturer dedicated to the mission of making cycling accessible to as many people as possible. Gazelle came to the US with electric bicycles specifically to make this a reality for a broader range of people and to help remove some of the obstacles that prevent people from considering biking. Their aim is to import not only excellent bicycles that marry heritage and innovation but also Dutch cycling culture. Ultimately, Gazelle wants everyone to enjoy the ride, safely, confidently, and for a lifetime. Learn More

PANEL DISCUSSION We have gathered a panel of bicycle enthusiasts from all sectors of life and work to discuss the film Together We Cycle, what we can learn from cycling in the Netherlands, and what it takes to be a bicycle change maker in your own community in the US. We are honored to bring together a range of perspectives and experiences and look forward to a spirited discussion. The panel will be moderated by Tina Butler, Marketing Manager for Gazelle North America.

Gertjan Hulster - Together We Cycle, Director

BICYCLE FILM FESTIVAL has been celebrating bicycles through art, film and music the last 20 years. Founded in New York City in 2001, the physical BFF spanned the world in over 90 cities worldwide to an audience of over one million people. The festival has an incredible history of working with the most important artists, filmmakers, venues, and institutions around the world.

How does the virtual Bicycle Film Festival work? A ticket allows you to view the feature length film, TOGETHER WE CYCLE followed by Panel Discussion at any time from Thursday, May 20 at 5:00pm PT until Monday, May 31 at 11:59pm PT streamed to your computer, tablet, or smart TV by simply clicking on the link provided by email after you purchase. You may view BFF in one sitting, or as you will, from the comfort and safety of your home. 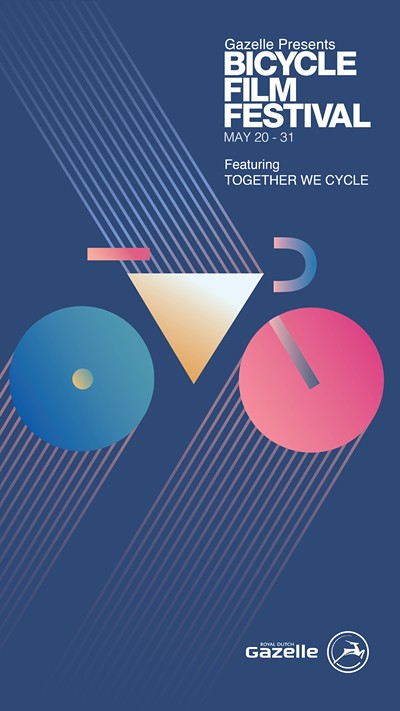