at OUTDOOR
This event has passed.

Tickets will be on sale at Colby Avenue and California Street starting at 5pm!

Live in Concert in Downtown Everett.

Whether you're in Downtown Everett for the Memorial Day car show or are eager to catch a live show after way too long, we are excited to announce Everclear and Tonic will be playing in the heart of Downtown Everett on May 28th! Everett Music Initiative is partnering with our friends at Cruzin' to Colby to bring you a Memorial Day Weekend concert like never before. With a combined nearly 10 hit singles on the Top 100 Billboard Charts and multiple Grammy nominations, national headliners Everclear and Tonic are coming to play on Colby Avenue on May 28th. With as many as 65,000 people attending the Cruzin' to Colby Car Show over Sunday and Monday, Cruzin' to Colby have partnered with EMI to extend the weekend with a Saturday night concert.
The outdoor concert will be a giant block party on Colbty, with an outdoor stage between Everett Ave and California Ave. Only those with wristbands will be let into the event, and there will little to no visibility of the stage/concert for those without a wristband.
The concert will partner with local restaurants on Colby, and will feature food trucks and a beer garden!

Considering Everclear has written and recorded some truly iconic ’90s alt-rock hits, it would be all too easy these days for the band to be a victim of its past successes, relegated to performing as a glorified jukebox, existing to satisfy the nostalgic cravings of Gen Xers everywhere. But singer-guitarist Art Alexakis isn’t about to start phoning it in now. Although the band hasn’t released a new studio album since 2015’s triumphant Black Is The New Black, Everclear continues to tour actively.

And while it’s a virtual surety that no Everclear gig is complete without a rendition of “Santa Monica” and “Father of Mine,” lately the band has found that exploring the full range of past material—especially the “deep cuts”—not only gives fans a rare treat, it also injects new life into the band’s live dynamic. “By mixing it up and digging into the catalogue, it still makes it fun and relevant for us, and I think for the fans as well,” says Alexakis. “It’s still important to play the hits, but by playing those other songs as well, it makes it all seem more vibrant and real.

Even though I recorded some of those songs 20 years ago, I haven’t played them in a long time, so it’s like reinventing the wheel. I’m having more fun now than I have in years. I think all of us are.” Formed by Alexakis in 1991 in Portland, Oregon, Everclear has enjoyed a lengthy career spanning 11 studio releases, numerous videos, thousands of shows and accolades that include a 1998 Grammy nomination. Like a true survivor, Alexakis has soldiered on through multiple lineup changes over the years: During the “classic” era, the band also included Craig Montoya on Bass and Greg Eklund on drums; the current touring lineup features longtime members Dave French (guitar) and Freddy Herrera (bass), as well as drummer Brian Nolan (also with American Hi-Fi), who has performed with Everclear on multiple past tours.

Everclear spent May and June of 2017 touring in honor of the 20th anniversary of So Much For The Afterglow, the band’s massively successful sophomore major-label release. The 40-date run was an incredibly emotional and personally satisfying experience for Alexakis, who was able to perform obscure cuts from that time period for the first time in many years. Connecting with fans in that setting also reinforced the lasting impression the album has made. “The tour was phenomenal. It left me and the band stunned at how important that record was to so many people, and to be a part of that, both then and now,” says Alexakis. “The legacy of it is still vibrant for so many people. It was great just watching people react when we were playing not just the hits, but deeper songs on that record. I always liked the deeper songs—they were usually my favorite songs—and when the band would play those, it would be really exciting and important for me. That was fun, seeing that reaction, and just talking to people after the show.”

Prior to that, Everclear experienced a career resurgence thanks to 2015’s Black Is The New Black, which not only proved the band could still rock, but also that Everclear remains creatively relevant, decades after their platinum years. As is common for many artists these days, Black didn’t set records for traditional album sales, but the release did see significant streaming activity and sparked a heightened social media presence, putting the group firmly back in the listening public’s mind. The band continues to ride this latest wave of interest. “I personally think [Black] is one of the best records Everclear has ever made,” Alexakis says. “It sounds like both old Everclear and new Everclear: It has a contemporary production sound, but it’s just old-school, angry rock songs. It’s kind of dark, very reminiscent of the early stuff. The sales weren’t great on it, but a lot of people streamed it. It got millions and millions of streams, so people were listening to it, and it resonated.” “We might make another record in a couple years,” he says. “Maybe later on this year I’ll feel like it. I don’t know yet.”

That said, the band’s live itinerary certainly makes up for its recent studio absence. Alexakis is excited to revisit songs from fan favorite records like Afterglow, Sparkle and Fade and the double album Songs From The American Movie, but also compositions from more underrated collections, like 2012’s Invisible Stars. “There are people asking for songs, so we’ll just try and learn songs as we go,” Alexakis says. “If we get a lot of response from people to play a certain song, we’re going to learn it and go on the road and play it. You don’t think, ‘Wow, I can’t sing that high anymore.’ We’re not going to worry about it. We’re going to play some rock n’ roll, and just do it.”

Music always undoubtedly brings us closer together. The connection forged runs as deep as any family bond does. Similarly, the story of Tonic revolves around the longstanding, close brotherhood shared among members Emerson Hart [vocals, guitar], Jeff Russo [lead guitar], and Dan Lavery [bass]. Since 1996, the GRAMMY® Award-nominated multi-platinum trio has consistently delivered anthemic and undeniable rock fashioned from eloquent song craft, lyrical honesty, and unshakable melodies. Along the way, they translated true experiences and real memories into a storied catalog that resounds as loudly today as it did over two decades ago.

“Sometimes, I’ll see somebody in the crowd who’s not more than twenty-years-old,” says Emerson. “This person will be singing a thought I had in 1995 right back to me: every word and every note. Realizing the power of that was a big moment for me. If there are people in the crowd and we’re playing together, that’s the magic of it. We still love it. There’s an understanding this is bigger than us.”

The songs continue to endure. To date, the band has landed six Top 10 singles, sold 4 million-plus records, and garnered a pair of GRAMMY® Award nominations. As the story goes, Emerson and Jeff linked up together in Los Angeles as Tonic during 1994, with Dan joining the group in 1996. Inspired after catching U2’s Joshua Tree Tour in his native New Jersey, Emerson went to L.A., where he and Jeff launched the group. Their full-length debut, Lemon Parade, not only went platinum, but it also yielded the“ #1 Most-Played Rock Song of 1997” in the form of the lead single “If You Could Only See.”  The band’s follow-up single,“You Wanted More,” served as the lead-off from the platinum Original Soundtrack Album for American Pie and the second full-length, Sugar.

In between a marathon of touring, they released Head On Straight 2002. The single “Take Me As I Am” received a GRAMMY® Award nomination in the category of “Best Rock Performance by a Duo or Group with Vocal” as the album vied for “Best Rock Album”—only to lose to Bruce Springsteen, “which is still a huge honor being from Jersey,” laughs Dan.

After a five-year hiatus, the three-piece returned to the charts on the heels of Tonic in 2010, landing in the Top 50 of the Billboard Top Rock Albums Chart and Top 25 of the Billboard Top Independent Albums Chart. Following a successful Pledge Music campaign, they re-recorded the seminal Lemon Parade acoustically for 2016’s Lemon Parade Revisited.

“The idea was, ‘How do we do something new?,” continues Jeff. “We wanted to take it back to the origins of the tracks. So, we sat in a room with acoustic guitars and played. It was a gratifying moment. At the same time, it made us realize that we really enjoy making rock. We love the thrill of playing. It’s come full circle recently, and it’s affected what we’re creating now.”

Outside of Tonic, each musician made a pronounced musical impact of his own. As a sought-after composer for film, television, and video games, Jeff wrote the score for HBO’s critically acclaimed The Night Of in addition to composing for Legion, Counterpart, Star Trek: Discovery, and more. He garnered the 2017 Primetime Emmy® Award in the category of “Outstanding Music Composition for a Limited Series, Movie, or Special” for Fargo. Dan played bass in the multiplatinum pop rock outfit The Fray before going on to establish himself as a writer and producer. In recent years, he’s been involved in artist management, working with the likes of Joe Jonas and Adam Lambert. Meanwhile, Emerson ignited a successful solo career, including albums such as Cigarettes and Gasoline [2007], Beauty in Disrepair [2014], and his 2019 third full-length 32 Thousand Days.

No matter what, the members of Tonic find themselves coming back together, hitting the road every year.

“This is like musical home base for us,” Dan leaves off. “From there, we can branch out and do other things, but this is something we all go back to. The fact the three of us have managed to stay together since 1996 with only a few years off is something we’re very proud of. The truth is we’re just three dudes from New Jersey and New York who have the same sensibilities. That’s why we’re still together decades later.”

Jeff agrees, “Every time we get back together, it just sounds and feels like Tonic.”

“The songs keep us around,” smiles Emerson. “We love seeing the excitement in fans’ eyes. We’re all connected. When we play, it’s a moment where we all feel something together." 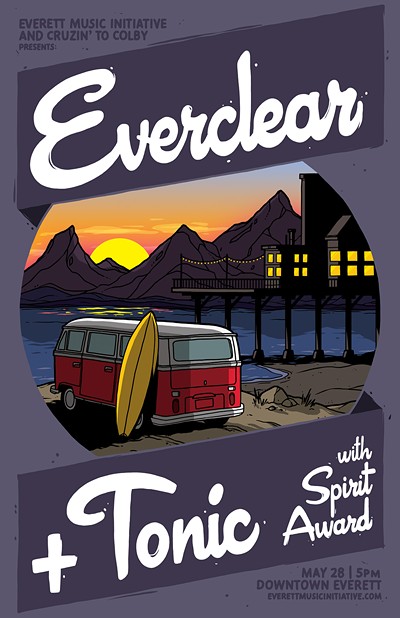