Garth Greenwell is one of the most celebrated and exciting young queer novelists in the United States. His award-winning first novel, What Belongs to You, was published in 2016. His second novel, Cleanness, released in early 2020, was excerpted several times in The New Yorker, and raved about on the cover of the New York Times Book Review.

"If there is a gay ghetto, then that's where James Baldwin is, and Thomas Mann is, and Virginia Woolf is, and that's the only place I would ever want to be," Greenwell told the New York Times in January. "And that's not on the margins of the literary tradition: That's right at the heart of it."

Greenwell came to Elliott Bay Book Company in February of 2020, where he was interviewed onstage by the Stranger editor Christopher Frizzelle. Greenwell's responses to Frizzelle's questions were so brilliant that audience members begged for a recording of the interview, but we didn't record it. This time, we will be recording it.

The conversation will be broadcast live from 5 pm to 6 pm PST. Afterwards, Greenwell will be the *special guest* at the Silent Reading Party from 6 pm to 8 pm. (The events are separate, and each require their own ticket.) 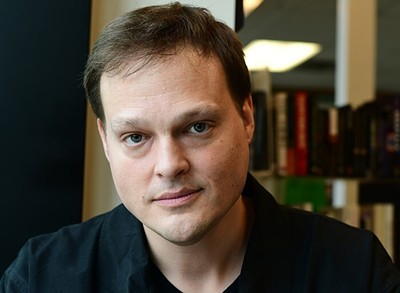